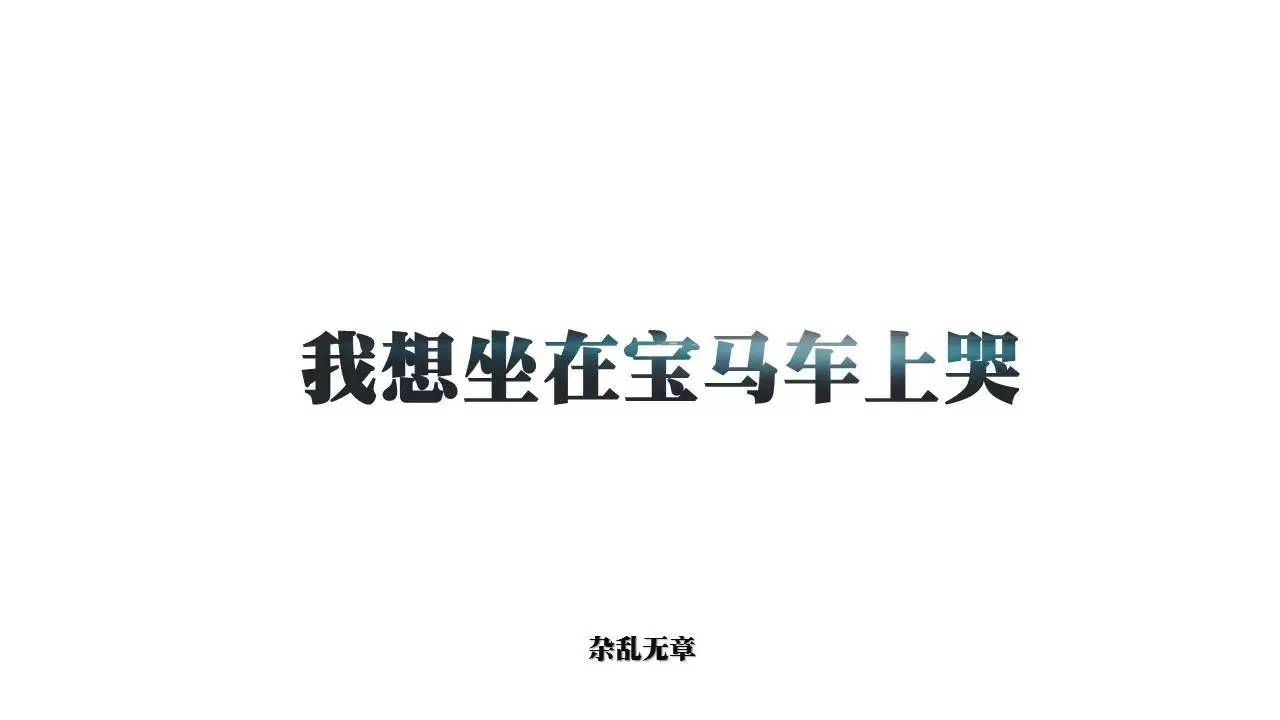 On the green train, I swore to be a rich man.

I went to see "Beijing meets Seattle 2" two weeks ago. I remember Jiao Jiao, who owed 1 million yuan, said such a sentence, "those who say there is no end in heaven are people who don't know they are desperate." Yes, throughout the movie, I cried when my grandfather said simple love words to my grandmother. I cried when Daniel held three 3D eyes and found that he had failed the old man, but I didn't remember their lines. I remember this sentence, because Jiao Jiao, who said this sentence, gritted her teeth and hated her poverty, and so did I. I also hated myself when I saw the expensive price tag. I didn't like this kind of myself.

once the thorn asked me, "there is a promotion, do you write?" I didn't even ask him which brand and which store he had promoted. I immediately replied to him with the word "write." He asked me, "have you been poor lately?" I was afraid that saying "I'm going to have no money to eat" would seem stingy, so I said, "my recent wish is to go to Shaxian County and order four cages of dumplings at a time." The great editor did not say a second word, but only sent me a 20-yuan red envelope, which said, "Damn it, tell the editor if you have no money."

at that moment, I really felt so happy, not because I felt the generosity from the editor, but because I watched my Wechat change from two yuan to 22 yuan, and four cages of dumplings plus a bottle of Vitasoy appeared in front of me. I really feel so happy. Who told me that money can not buy happiness, when you even have a problem eating, you can know that the simplest and most direct source of happiness is money.

Xiao Bo is my primary school classmate and neighbor. At that time, Xiao Bo's mother was in gambling debt and lost all the 200000 her family spent on decorating the new house. She also owed her uncle more than NT $100,000. That night, Xiao Bo's father brought Xiao Bo to my house and said to Xiao Bo, "go and play with my sister, and Dad will chat with my uncle."

Xiao Bo and I sat in front of the TV watching the Seven Dragon Balls while playing Pinball Superman. The glass beads in my red Superman chest bounced out. When I went to the balcony to pick it up, I heard Xiao Bo's uncle sobbing and said to his father, "I really can't afford it. I don't know where she's hiding now."

Xiao Bo helped me put the marbles back on Superman. I looked back and saw my father patting Xiao Bo's father on the shoulder and lit him a cigarette. Later, I learned that although Xiao Bo's uncle lent them more than one hundred thousand yuan, he was in a hurry and even found someone to bully the two father and son. This is what Xiao Bo told me when he grew up. "one night they asked someone to make a noise, and my father held my head and kept telling me not to be afraid, and then we stole it in the back alley and spent the night at McDonald's."

in fact, when I was sad, I thought Xiao Bo was very happy, because at that time he didn't know anything, and there were still people who loved him and protected him.

later, Xiao Bo's family paid off their gambling debts, but the noisy relationship with their uncle's family could no longer be made up for. "sometimes money is more important than relatives. After all, survival comes before love."

small bloggers who have money, understand that money is very important, especially for those who don't have it. Because the other end of the weight is consanguinity, and you tend to lose.

it's graduation season recently. on the day the graduation photo went to organize the scene, I asked a senior brother that he had been in love with his girlfriend for six or seven years. "will you get married soon?" He said, "it's over if you can become a regular worker and get a raise. I don't want her to live a poor life with me."

it turns out that there is some happiness, which is really to be bought.

it was evening, and the setting sun was reflected from behind the big grass in front of the library, and his classmates called him "Dong, come and take a picture of the dormitory."

looking at the back of him running past, my inner BGM is the sentence of "Sun Da leftover",

"your lover is waiting for you to drive a BMW to marry her."

because I liked a writer very much in junior high school, I went to buy her books one by one. But after buying two or three books, I found that I had used up all my pocket money. At that time, I had 100 yuan a week for meals, so I managed to charge only 75 yuan a week to my meal card, and I could buy one for the remaining 25 yuan. I bought one a week. Two months later, I read all her books.

but the price I paid was that I didn't have a breakfast of more than five yuan in those two months, and my mother finally scolded me when she knew about it.

now you can go to the bookstore without clenching your fists and waiting like a cheapskate to read the whole book before closing. I can buy a series at once, but when I walk into the bookstore with the money, I can't remember how long I haven't bought a book. I'm obviously rich, but I can't buy back any of the books that I hide in bed and don't want to borrow.

but if I had money, I wouldn't have to be scolded in class every day.

since disorganized articles can be paid, I began to want to write and revise articles more seriously and professionally, not because I just want a good article, but because I want to get more money. Making money means to me that I don't have to hesitate to ask my family for money, that I can afford occasional midnight snacks, that I can buy more expensive cosmetics, and that the cost of planning to travel next month is accumulating little by little.

I have never felt that "loving money" is a shameful thing. It is really a very proud thing to get money through one's own efforts and spend it on material consumption, thus bringing about a great improvement in happiness.

when I skipped class and went to Chengdu, I bought a hard seat, 224 yuan, 3Eight hours.

I haven't slept for more than two hours for 38 hours. When I close my eyes at night, I hide my phone in the sleeve of my sweater. The bag under my feet must be close to my ankle at any time. I will know when others move. There was only ten yuan left in cash on the return trip, and I used it to buy two instant noodles to cover 38 hours of food and clothing for the second time.

on the green train at 120km per hour, with dark circles under my eyes, I took a picture of instant noodles to the editor group and said, "I swear to be a rich man."

when I say I like money, please don't interpret it as "snobbish". I just want to use money to make myself happier.

I don't have the money to do whatever I want. I see that my eyebrow pencil has run out of music bags, and my favorite line bear hand case is about to be sold out, but I am still clutching my wallet to calculate how many dumplings, how many boiled rice and how many cups of pearl milk tea will cost me, and silently calculate in my mind, "how many words do I have to write to earn this money back?" "how many soft articles do you have to write before you can spend your money quickly?" When I was, I didn't feel fucking happy at all.

I remember how embarrassed I was when I flipped through the menu and how hard it was to sit in a hard seat for days and nights. So I keep telling myself that if you want to end this embarrassment, you should make more money and enjoy as much happiness as you can. Later, I slowly saved money, and when I went on a trip, I was finally able to take the high-speed train, and when I went to dinner, I was able to look generously not by the price but by which dish I liked first. I think happiness really comes too realistically. People who say that happiness can't be bought with money are all because they don't know where to buy it.

when I am poor and rich, I need to know what I want, but I also know where my level can go.

"you can enjoy the best as much as you can bear the worst."

Brother long sent me a link some time ago with the title "I just want to buy expensive". I remember there is an example of encouraging girls to be financially independent. You can buy yourself an expensive bag when you are so rich that you are lovelorn. Instead of pretending to roam the streets with long hair and a dozen cheap beers. Because the one you love will leave you, but the expensive things will always grow in value.

I want to be rich. I don't want to be the material in folk songs. Crossing mountains by train is very romantic, but when I look at the dark circles under my eyes after I open my eyes, I swear that I want to be rich enough to travel by plane.

"remember that no one needs to take care of your temper except those who like you."

someone told me, "in fact, my whole life is just for a bowl of rice and a bed." she is reminding me to be contented, but I want a delicious meal. I want to order a lot of meat. I want a very comfortable and soft bed for me who has been tired all day.

I don't want to be contented. There is nothing more real than watching the number in my bank card increase. The kind of peace of mind that you have the ability to realize what you want in the future is a hundred times more direct than loving and hating someone.

of course, returning to reason, whether money can buy happiness depends on your definition of happiness. For example, some people want to spend their whole life with their loved ones, and the source of happiness is feelings rather than money, but I don't want the feelings I may lose to become the basis for my happiness. So I hope to earn enough money, enough to stay away from the secular annoyance and live alone.

"buying a house is not important, the important thing is that the family can be happy."

"it's hard to be happy in a small apartment!"

We know what is trendy, all our beach evening dresses are an absolute must -have. Find a design that is perfect for you, they will bring a whole new level to your wardrobe.

but the tone of the conversation makes the author add an exclamation point.

I think he must have been poor when he said that.