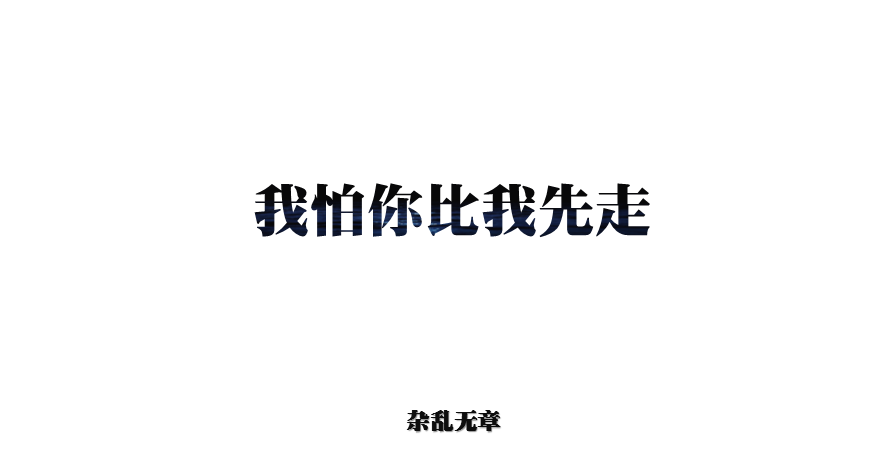 I'm afraid you'll leave before me.

good evening, everyone. This is a manuscript written on the bus more than a month ago. At that time, I heard something about my friends and the death of my family. I had a heavy heart at that time, and after I wrote it, I felt that the subject matter was rather gray. So I kept it on hold. Until today, a friend in Taiwan told me, "the six-magnitude earthquake in Ilan, Taiwan, was clearly felt in Taipei."

I just remembered that today is the eighth year after the Wenchuan earthquake.

this coincidence reminds me that the wheel of time has never intended to stop.

also reminds me that for those relatives and friends who may leave us because of natural disasters or man-made disasters, we will not have time to say goodbye.

the weather forecast says there will be a thunderstorm in Dongguan in the evening, but I haven't heard a sound of thunder until I got on the bus back to Guangzhou in the dark.

then I thought the weather forecast was like a lottery. I really wouldn't hear a clap of thunder.

there is even a sunset in the direction of the newly built subway station, which makes me feel that everything is all right.

then I received a Wechat message, and my friend Awei asked, "how can I comfort my friend whose family has died of illness?"

I hugged when others were lovelorn, got drunk when others failed, and cried with others when they lost their jobs until dawn. But this time I gave the worst answer. I was silent for a long time and dared not answer, because I knew it was useless what I said and did.

I must admit that the departure of my loved ones has always been a topic that I dare not think about.

when he asked me, I happened to be passing by the Dongjiang River, and the roof of the tallest building near the window sketched out a door with yellow lights.

it would be nice if that door were like the door of heaven.

it would be nice if there was a heaven.

I don't know if it's a coincidence or providence. I don't know if I'm singing about Avi's friends and family or any of us and our own family. I don't know if I'm singing "We didn't get together at last" in the headphones. When my grandfather suddenly fell ill in his second year of high school, he really shivered for no reason. The whole quilt trembled with his "bony" body, and he didn't even have the strength to sit up. Everything he ate, whether it was liquid food or the most common boiled water, spit it out.

he looked at me with dim eyes. I went to sit by the bed and touched his forehead, which had been bald many years ago. There were a lot of brown spots on his forehead. I touched it slowly and stroked his forehead very carefully for the first time. He stretched out his right hand, which was still on the drip, touched my forehead and said, "good girl."

I looked at him and said a word to him. I couldn't help crying. I sat by the bed and held his hand. I could feel my bones and muscles under the thin and yellow skin. I said, go out to the balcony and wipe my tears, and come back to continue. That's the only time I've ever worried. "I'm afraid he'll just walk away. I'm so scared. I'm afraid I won't see him again."

it was early July, and there were still two weeks to go before the final exam. I cried and asked my mother to agree to ask for leave with the head teacher. I took the leave note for a whole week, because I had to make sure that I would watch whether he stayed or left. I dared not leave regrets. What I feared most was that my family suddenly appeared at the door of the class and beckoned me to go out.

this kind of fear is the most nervous waiting in my life.

"you know that they are only half of the people who can accompany you, so do you know why I go back as soon as I am free?" this is what my brother said to me the day before yesterday. I didn't cry, but tears wet the phone screen down my cheeks.

birth, aging, sickness and death are normal, and you have to live in the following days, as usual, go to work, go to school, cook and take care of your family. But this does not mean that you have come out, the sadness of losing a loved one is always in your every detail, you will unwittingly cook one more; your phone address book still contains the phone that can no longer get through; you still want to buy fresh fish and cook his favorite parsley and bean curd fish soup.

but none of this can be done. You won't find that person is gone until you finish it.

that kind of person is not suddenly realized, it is the loudest thunder.

"in my best days, the people I love most are not with me."

I'm afraid that you are my belief all the time, but when I really get all I want, you leave. I'm afraid you won't wait for me, because it's something that can never be done all over again.

but some people believe in the conservation of energy. when he left in this way, he actually existed in another place in another way. When he was a child, he always scolded his mother and finally wanted her family to be neat. Finally, after the scene of each grandson's fierce death, there was a sentence, "the moon is the moonlight of the fifteenth day of the new year." she became the light that shone on the one she loved forever. Just like the reason why my family believes in Christianity, my mother-in-law keeps telling me that "there is another world in heaven". If you are willing to believe it, I really think their death should be "gone to another world" rather than "left this world".

tears and yearning should not be forcibly tolerated at this time. Cry if you want to, and be bored if you want to be in bed, because the function of comfort and persuasion from all outsiders is very empty at this time. Great pain can only be dispelled by itself in time, truly continue to live with sadness, and then slowly fade away in life.

I have always disliked such things as "villa", because I always think that a home should not be too big, because if it is too big, it will look empty. You have to walk more distance when you go to find another family, so one year when I was choosing a new room, I chose the smallest utility room, because it was easy to be crammed with things around, so that the ghosts imagined after turning off the lights had no place to exist.

"but when he died, I was no longer afraid of ghosts, because I knew it was him."

you're still here, but it's so far away that I can't see you.

Choose the bewitching baby blue bridesmaid dresses only at a limited budget. We stock the best selection of your preferred taste.

I asked my friend, a girl who told me in the first year of senior high school that she wanted to study in Tianjin and then stayed in Guangzhou.

"Why don't you study out of the province?"

"I'm an only child, and I'm afraid there's something I can't do in time."

if it's too late, I want you to call home now. One year winter and summer vacation plus Dragon Boat Festival and Mid-Autumn Festival, go home five times, there are still 40 years, 200 times, you can say "200 times" goodbye, but you should know that the 201 "goodbye" is no longer "good-bye next time".

stop saying "see you tomorrow", because the dialogue of the next sentence is sometimes arranged by God as "tomorrow and the end of the world".

I wrote an article about Director Chen a few days ago, and the more people read it, the more negative voices appeared. There was even a voice saying, "you make money by writing about such dead people. /you write like you know it, and you feel pretentious and superior, don't you?" So I was under a lot of pressure that day, and I felt like I didn't do anything wrong to write this kind of hot spot. Today to write this article related to the Wenchuan earthquake, I will not care about the voice of such people, because I know there is no need to take them seriously.

in eight years' time, writing this matter again, the words are more majestic and sorrowful than the shock of 1/10000 eight years ago. All our tenderness, memories and mourning today are negligible in front of May 12, 2008. if you haven't lost it, you won't know what "skin pain" is. Onlookers can only be glad that this didn't happen to them.